Romantic Miniatures for Piano - Book one

Romantic Miniatures for Piano ​is a set of pieces consists of my more interesting early compositions and any romantic miniatures that I have written up to the present day. I am often called to write such pieces so the set is liable to grow in the future.

Dream Tunnel was the first composition I wrote at the age of 10 (1990). It is in the Aeolian mode with an ostinato accompaniment.
Dream Tunnel would be ideal for a piano student who is bridging the gap between Grades 1 and 2 and therefore should be thought of and treated as a study for teaching purposes. I have been a piano teacher myself and have successfully used this piece to demonstrate ostinato and modal music; it is also very good for students that need help with their left-hand work.

Nameless was written in 1991). As with Dream Tunnel, it is very simple based on a repeated chord pattern and melody with no variation.
Nameless would be ideal for a piano student who is bridging the gap between Grades 1 and 2 and therefore should be thought of and treated as a study for teaching purposes.

Enigma Part One was written in 1992 during a music lesson to be played as a duet at the end of the lesson with Stuart Purcell (to whom the piece is dedicated). The piece is very basic musically being based on a repeated chord sequence and melody. Technically it would be ideal for about Gr1-2 soloist. Stuart was not a keyboard player but managed to tackle the main tune with ease.

Written as part of a Year 9 music lesson.

Larghetto was written when I was 14 (1994) as part of a piano sonata for GCSE coursework. The sonata has since been scrapped but its second movement (Larghetto) was grouped into the set of pieces called 'Romantic Miniatures for Piano.' The piece was written just as I was staring piano lessons and is roughly Grade 3/4 in standard. The harmony is simple, based around the mixolydian mode with a slow middle section adding contrast to the piece. 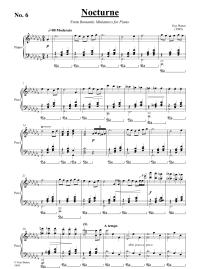 The piece consists of a simple theme played twice with very little variation.

'Libesträume' was written in March 1998. The title (Love's dream) is portrayed by the romantic harmony although the false relation in both the melody and harmony suggests that all is not straightforward. The piece was influenced by the preludes of Chopin. The structure is a simple ternary and the piece is ideal for improving right-hand chordal work.
In 2006 the piece was orchestrated for The Furze Platt Senior School Orchestra.

In The Name was written in August 1998 for Louise Taylor and was subsequently grouped into the set of piano pieces called 'Romantic Miniatures for Piano.'
The piece uses a simple musical cipher in which each letter of the alphabet is attributed to a note: A=a, B=b, C=c, D=d, E=e, F=f, G=g, H=a, I=b, J=c etc. etc.
​ 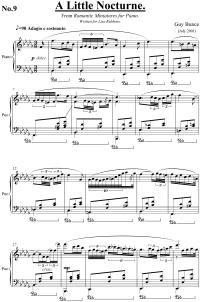 This piece is designed as a miniature pastiche of the Chopin nocturnes and is ideal as a study for any piano student of around Grade V. The key is quite difficult but can easily be transposed down a ST into A minor for those less able (a transposed version is available on request).
​
The piece will also serve as a demonstration of the use of a Neapolitan 6th (b10) and a German 6th (b33) which both occur once.
The piece was written (21/7/01) especially for Lisa Rubbenck. 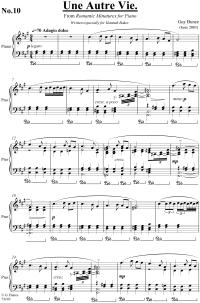 This piece was written for Hannah Baker (see dedication to Dream Tunnel) and is in the style of a Chopin Nocturne although the parallel is not always clear. I was inspired to write the piece by seeing Hannah again after many years and hearing that she still plays the piano. The piece is around Grade VII level, mainly owing to the key. As with most of my more 'simple-sounding' music, the piece is littered with secret codes and messages. The piece has now been complied with a group of small/simple pieces under the title Romantic Miniature for Piano being the last piece in the set. The set ends as it began, 13 years later with a dedication to Hannah.