'Phi'  1.618 was written for my Mmus in composition at Royal Holloway for the course taught by Dr. Philip Cashian. The piece was composed between 17th October-1st November 2006 and as yet remains unperformed owing to its complexity. For  this reason, I should like to challenge any flautist who specializes in experimental music to learn it. I am willing to dedicate the piece to whomever  learns it first! Please email me for a complete copy of the score. 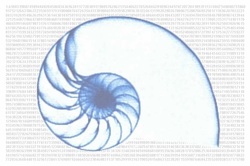 The construction of this piece is based around the Golden Number (Phi = 1.618) and the related Fibonacci sequence  (1,2,3,5,8,13, etc.). The piece was planned to be around 5 minutes in length and would use a strict construction process involving Phi.

The pulse of the piece was designated at 40 bpm  which required 210 beats to last just over 5 minutes. A theme was constructed lasting 21 beats.  This theme begins on the lowest note of the flute and reaches the octave (and therefore the climax of the phrase) at the Golden Mean (1.618 of the way through 21 beats =  beat 13). This  theme is constructed out of 2nd, 3rd, 5ths thus exploring  the fibonacci. To construct the rest of the piece, the main theme was  enlarged in an almost photographic method by a factor of 10. This meant  that the original rhythm of the theme was augmented (X10) to produce a 5 minute cantus. At the same time as stretching the rhythm, the pitches  used in the theme was stretched so that the distance between the initial note  (C) and its octave (at the climax on beat 13) become the full range of  the flute (3 octaves). This meant that the intervals between individual notes of the 'cantus' widened. The cantus was then placed on a  new stave  above the composition (as can be seen in the sketch on the left) and  the piece was build on its skeleton. A rule was used that  stated that  a note appearing in the cantus had to be marked in the final composition  (after the main theme had been presented). As a result of the method  used, the flutes 'highest' note and there for the main climax of  the piece is reached at the Golden Mean (1.618 of the way through).  The piece used extended flute techniques such as  multiphonics  (playing chords), microtones, timbral trills, and whisper  tones. Also such effects mark important structural features.