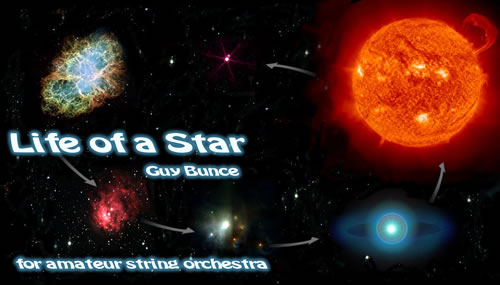 
Life of a Star was written especially for ‘Yorkshire Late Starters Strings’ and depicts the  life cycle of a star.  The piece is  divided into five sections which progress without any pauses:

1: Nebula
A  Nebula is the term used for a region of space in which the formations of gas  dust and other space material begin to cluster together.  As a result the mass and gravity increases,  attracting further matter.  The opening  section of Life of a Star depicts the  emptiness of a Nebula prior to the gravitational collapse that leads to the  formation of a Protostar.  Ideas and  motifs are explored in this section but they are cut short.  Often, a Nebula begins to form when some  event takes place causing the initial attraction of matter.  This ‘event’ occurs about half way through  the first section (b.38) leading to creation of a
Protostar.


2: Protostar
A Protostar forms as matter gradually compacts causing the centre (or core) to  heat up.  In  this section of the piece  the ‘centre’ of the texture begins to become denser, beginning with the Violins  2b and gradually attracting the other lines.   As  the section continues, the tessitura of the music narrows until the  focus is on  four notes (C, C#, D, F#) – the motifs from which all material for  the piece is  derived.  The tessitura  continues to contract depicting the Protostar reaching 15,000,000 degree  centigrade.


3: Main Sequence: Chorale
The high temperature reached by the Protostar causes nuclear fusion of hydrogen to  form helium, thus the star begins its main sequence.  This section of the piece consists of a  pulsating chorale interspersed with solo sections.  The texture is often thick and the tessitura  is wide and the ‘core’ (or middle of the texture) holds the music together  through the devise of an inner pedal.   Over time, the star gradually becomes unstable in its core as the  hydrogen runs out. The piece depicts  this through the appearance of pizzicato/col legno in the  ‘core’ (Violas and  Cello b).


4: Red Giant
As  the helium  core runs out, the outer layers drift away from the core as a  gaseous shell, resulting in the star shining less brightly.  The tempo at this point begins to decrease  and the centre becomes more unstable along with the tessitura of the music  becoming wider until only the 1st violins (a) and the double basses  are left.  The timbre becomes ‘icy’ as  the remnants of the star cool.  Fragments  from the first section return.


5: White Dwarf
As  the gaseous shell disappears, what is left is the remaining shining core or  ‘white  dwarf’ – represented by the dense improvisations around a limited  range.  White  dwarfs gradually cool down  until they stop shinning at which point the star is  dead.