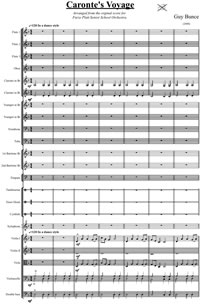 Caronte's Voyage was originally written for a BMus degree course called Composing and Arranging for Young People. The original version was for string orchestra of various levels from beginners to Grade 5. The piece was scored for double string orchestra with the first orchestra (a) consisting of advanced players and the second (b) consisting of beginners. The orchestration is such that most parts can be omitted and the beginner parts are usually doubled for support. This version was completed on the 10th January 2000.

The piece is named after Caronte, the ferryman of the dead from Greek mythology. The souls of the deceased are brought to him by Hermes, and Caronte ferries them across the river Styx.

The piece is in Rondo form with the main theme being dance-like and modal. In the middle of the piece the plainchant Dies Irae (from the Requiem Mass) is heard. This is later added in counterpoint to the main theme.

The piece was revised and re orchestrated in May 2004 for Furze Platt Senior School Orchestra. This version retains the form and character of the original but adds colour to the piece through the orchestration. The new version is scored for: